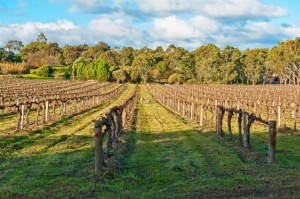 In order from first to last, the five largest producers of wine in the world are Italy, France, Spain, the United States and Argentina.

Not only is Italy the biggest wine producer, but it’s also been in the business the longest. No country in the world produces more wine than Italy, responsible for making about one-fifth of the world’s wine. Italians lead the world in the most alcohol consumption too, at 59 liters per capita. (Compare that with only 7.7 liters per capita in the United States!) Italy is home to more than one million active vineyards.

France consistently ranks as at least the second largest wine producer. (In fact, France and Italy tend to periodically exchange places between first and second. In 2005, the last time France was ahead, Italy was reported to be producing 17.6 percent of the world’s wine.) France credits its winemaking origins to the Romans, citing historic evidence that its former occupiers under the Roman Empire experimented with wine in the various regions of France’s more favorable climates. France today offers the world a broad variety of grape options, including Cabernet Sauvignon, Chardonnay, Pinot Noir, Sauvignon Blanc, and Syrah (to name just a few).

Although Spain has the largest amount of land dedicated to vineyards—some 2.9 million acres—it is third on the list of the world’s wine producers. The Rioja and Ribera del Duero regions are perhaps the best-known wine-producing provinces in Spain, yielding the finest wines that country has to offer. The citizens of Spain drink an average of 38 liters of wine per capita each year.

It may surprise you to learn that the United States is the fourth largest wine producing country in the world. Although the U.S. has only been producing wine for 300 years, already the industry has spread to all fifty states. California leads the nation in wine production, followed by New York, Washington and then Oregon. Texas is working to close the gap, however, with the Texas Hill Country evolving into a very successful destination both for growing grapes and for making wine. The United States has more than 1.1 million planted acres dedicated to wine production, making it the fifth most planted wine country in the world.

The fifth largest wine producing country is Argentina, its citizens consuming 90 percent of the wine that they produce there. Before the 1990s, Argentina was the leading wine-producing country outside of Europe, until other countries began focusing more of their efforts not only on producing wine, but also on exporting it. In the past few decades, Argentina has begun once again ramping up its efforts to export its wines, in the hopes of increasing their nation’s visibility and popularity in the world’s wine production.

Primarily because of wine, grapes remain one of the most abundant, successful crops in the world. At Vintage Oaks we’re proud of Texas Hill Country, and how we have contributed to the world of wine. Ground is breaking soon on our very own vineyard at Vintage Oaks, and we take seriously our responsibility to continue expanding the reputation of the Texas Hill Country around the world. You can learn more about what we’re doing at our website, or come and connect with us on Twitter and on Facebook.