Our Neighboring City, Austin, Is Growing!

We always knew that Austin was a great place to have close by, and a recent article released by CNN explains why so many people are drawn to this area.

With a 2.6% population increase between July 2012 and July 2013, Austin is topping the charts for the top 10 fastest growing major metropolitan cities in America. Gaining 47,941 new residents in just one year, our fantastic city is being applauded as a new home destination. 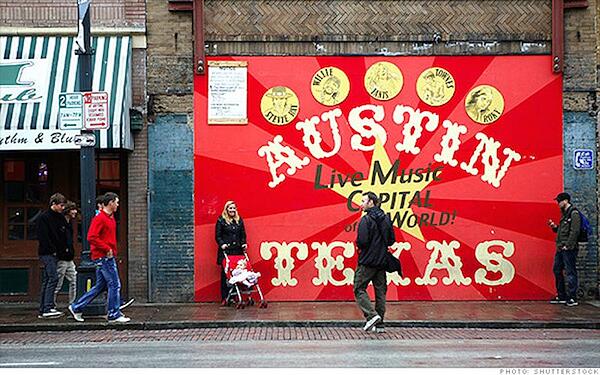 It Has So Much To Offer

A thriving university town with one of the best live music scenes in the country, CNN says that Austin's youthful, creative vibe keeps people coming.

With its more than 250 live music venues and festivals, like its famed South by Southwest, Austin's "cultural vibrancy helps to drive the economy in a big way".

Austin's massive University of Texas, with its 50,000-plus enrollment, is known for its engineering and computer science programs, which have spawned many local tech businesses and incubators. It has also attracted a number of big tech companies -- Apple, Google, Facebook, Intel -- looking to recruit young talent.

In January, the city's unemployment rate fell to 4.7%, the lowest of any metro area with a population of one million or more.

Following Austin is Houston! Coming in at number 2 on the list, Houston experienced a 2.2% population increase thanks to oil and gas pricing increases, their manufacturing sector, and extensive medical research companies.

If you’re thinking of relocating to Texas, choose Vintage Oaks. This master-planned community is located very close to Austin, one of the fastest growing cities in America!