Austin and San Marcos are atop the Best Performing Cities list 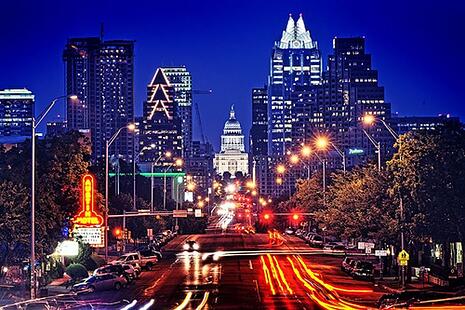 Photo Courtesy of The City Fix

Business Insider reports that new rankings of America’s Best Performing Cities by the Milken Institute are “based on data from both long- and short-term growth in jobs, wages, salaries, and technological output.”

“The top spot goes to the metro area of Austin-Round Rock-San Marcos, a rising technology center. Austin came in second with job growth over the last five years, due in large part to a diversified technology base," they said. "Homegrown tech companies like Dell, National Instruments, and Flextronics complement incoming companies like Apple and IBM (which both now have large bases in Austin), as well as start-ups coming out of the University of Texas Campus. The city is extremely business-friendly with a low tax, low regulation environment that makes it attractive to out-of-state firms.”

San Antonio–New Braunfels was No. 12 on the Milken list, noted for their strong job growth—San Antonio in medical and oil and gas. “Home to one of the largest medical facilities in the nation, San Antonio has seen strong job growth from military medical operations. Ambulatory health-care services created more than 12,000 jobs over the last five years. San Antonio is also home to the largest oil and gas development in the world in the Eagle Ford Shale. Record drilling levels and high-yield wells are pumping new jobs into energy and related sectors.”

San Marcos was named the fastest-growing city in the nation for 2013 and 2014, according to the Census Bureau. San Antonio took the No. 2 spot on the Census Bureau’s list, and Austin was fourth. New Braunfels, within easy commuting distance of Austin and San Antonio and home to Vintage Oaks, the fastest-growing community in the Texas Hill Country, was recently named the top rebounding city in the U.S. by Homes.com.

Both San Antonio and Austin also rated highly on Forbes’ 2014 Best Big Cities for Jobs list; San Antonio was No. 1 on the list for attracting educated individuals; Austin placed third on the list, and was also recently ranked atop the “On Numbers” report with the No. 1 economy in the nation.

Landbuyers and those looking for home-lot packages in a well-planned community in the Texas Hill Country are drawn to areas like New Braunfles and masterplans like Vintage Oaks. With an array of homesites and offerings featuring some of the Hill Country’s best views and an abundance of resort-style amenities including pools, parks and ball fields, and the Tuscan-style clubhouse, it’s no wonder Vintage Oaks has increasingly been on the receiving end of the hot local market.