The Hill Country holiday lights you have to see 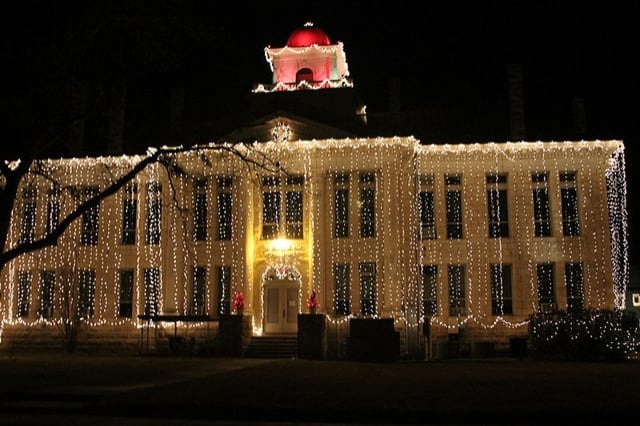 Is viewing Christmas lights one of your favorite Hill Country holiday traditions? You’ll have plenty to enjoy this year, at hotspots all throughout the area.

It’s just not Christmas without a trip (or two, or five!) to Santa’s Ranch, open until January 1. A true Texas holiday destination, Santa’s Ranch features 1.5 million lights and festive displays along its mile-long trail. Don’t miss the homemade treats!

The holidays in Johnson City are truly spectacular, with light displays all over the area. More than one million lights cover the Blanco County Courthouse, and you don’t want to miss the twinkling lights that wrap the grounds of the Pedernales Electric Co-Op headquarters and the downtown Johnson City Memorial Park. The city is lit up until January 1.

“Bastrop River of Lights walking trail is located in Fisherman’s Park and continues all the way down the Lower Colorado River to Ferry Park, about a half mile,” they said. What started in 2002 is today an inspiring holiday event with lights and displays that are open for touring until New Year’s Eve.

Wimberley offers one of the Hill Country’s best Christmas light displays, but that’s not all. This eight-acre trail open until December 29 also dazzles the family with festive features including the Jingle Bell Express train, a musical garden, visits with Santa as well as princesses such as Elsa, Anna, Cinderella, and Snow White, and snacks for sale.

Lake Marble Falls is stunning every day. Add in more than two million lights and 400 lighted sculptures, and you have a can’t-miss holiday spot. The Walkway of Lights also features food for sale and photos with Santa, and is open until New Year’s Day.

This Drive-thru Christmas lights spectacular in Boerne features more than two million lights, plus hayrides, a Santa’s Village with holiday treats and visits from Santa himself. It’s open until New Year’s Eve.

Closer to Austin, Round Rock impresses with a 1.5-mile trail featuring two million lights! The Rock’N Lights Trail is open until December 26.

Heading in the other direction to San Antonio for some Christmas fun? SeaWorld presents the largest holiday lights display in Texas, with five million of them in addition to Christmas shows, holiday foods, and Santa Claus. You won’t want to miss out on the San Antonio Zoo at Christmastime when it transforms with Zoo Lights. They light up the park after hours until January 1, with an all-new light show and special activities including ice skating, s’mores roasting, and camel riding! And the River Walk is another must-see at the holidays with lights twinkle along and on top of the water.

Want more information about living in the Hill Country? Visit Vintage Oaks, offering Hill Country land for sale plus custom and semi-custom homes and an array of resort-style amenities including multiple pools, ball fields, walking trails, and a Tuscan Clubhouse. Vintage Oaks is the Hill country fastest-growing community in the Hill Country for the past three years and is ideally located right on the Texas Wine Trail between Austin and San Antonio.

You can also click below to see new Vintage Oaks homes that are now available for immediate move-in.